Feeling so guilty for losing the momentum to update this blog. Life is not always an easy sailing..... Well I am trying the best to adapt to it. And here I am again to present to you this Citizen Leopard.....


Leopards are agile and stealthy predators. The species' success in the wild is in part due to its opportunistic hunting behavior, its adaptability to habitats, its ability to run at speeds approaching 58 kilometres per hour (36 mph), its unequaled ability to climb trees even when carrying a heavy carcass, and its notorious ability for stealth. The leopard consumes virtually any animal that it can hunt down and catch. Its habitat ranges from rainforest to desert terrains. (extracted from Wikipedia) 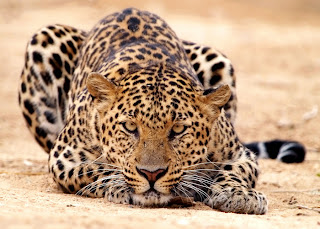 Citizen is one of the world's largest producers of watches. For almost eight decades, Citizen has been ahead of its time. Citizen brand has always stood for innovations and high precision that make life better for everyday people. 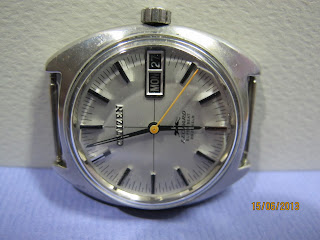 Some 40 years ago, as the 1960's drew to a close, the development of Citizen's automatic wrist watches was reaching its peak, in terms of both range and quality. Around the middle of that decade the company switched from it's geared 'jet' rotor design to the more reliable and widely used oscillating weight type, and the late '60's saw the launch of the Chrono Master high grade automatic alongside a range of other new models.

In 1969 Citizen launched the evocatively named Leopard line, based on the 7200 calibre. Although this movement was used in other models, the Leopards were distinguished by one key characteristic not to be found in the others – they were all high-beat, running at either 28,800 beats per hour (bph) or 36,000bph. These were Citizen's first watches to run at these speeds, reflecting the quality and reliability they could achieve by that time. These fine movements also all feature a micro adjuster on the balance to assist with accurate regulation.

In a relatively short space of time the Leopard line offered an extensive range of watches, with different jeweling, styles and price points, and can perhaps be best described as 'upper mid' to 'high' grade pieces.
Besides the high-beat common denominator, the Leopards are also characterized by their jewel counts, which are always even numbers – i.e. 28, 26, 24, and later in the production run, 22. Other models using the same base movement usually carry odd number jewel counts, for example the Custom V2 and Seven Star V2, with jewel counts of 25, 23, and 21 (the only exception to this I can identify is calibre 7790, running at 21,600bph with 22, 24 and 26 jewels).

The production run of the Leopards was short-lived – just as the development of mechanical watches was reaching new heights, the introduction of the much more accurate and soon the much cheaper quartz module in the early to mid-1970's brought that development to a halt. The latest Leopard movements entered the market in 1971, just two years after the first model was introduced.
(This articles on Citizen Leopard was brilliantly written by Mr Stephen Netherwood, who has made a lot of research about this watch. His original article on this Citizen Leopard can be viewed at http://seikoholics.yuku.com/sreply/344/Citizen-Leopard) 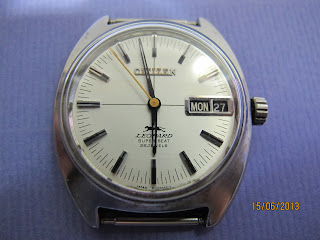 This is a 1970 Japan made Citizen Leopard Super Beat. I think Citizen chose the name Leopard due to the fact that it is one of the fastest animal on earth. This is also attributed to the high beat 28,800 bph 26 jewels movement this watch bared. 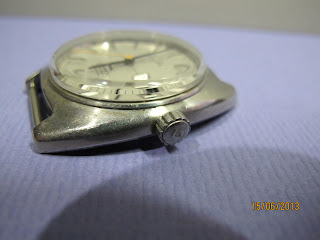 This watch has a very nice solid stainless steel with thick mineral glass. This watch is approximately 36mm in diameter without the crown. The crown has a big capital C to symbolise Citizen. The white silver dial is divided symmetrically into 4 sections. Apart from the metal Citizen wording, a Leopard logo as well as the words Leopard, Superbeat and 26 jewels are imprinted on the dial. What is interesting with this variant of Citizen superbeat is the second hand which is yellow in colour. 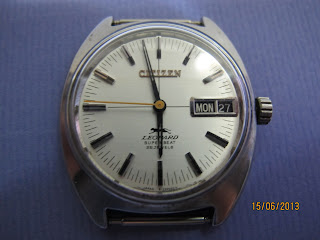 This watch has the day and date function at 3 O'clock position. The Day date windows are divided with a silver frame. The base of the day and date disc are black in colour and giving a very good, attractive contrast with the white dial. 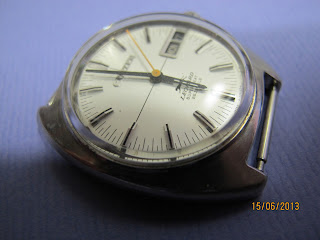 This watch has a screw down case back and is water resistant. Citizen Leopard can be considered as a medium to upper end of Citizen vintage mechanical watch. I rated them alongside Seiko Lord Marvel. The built quality of a vintage Citizen is never a question 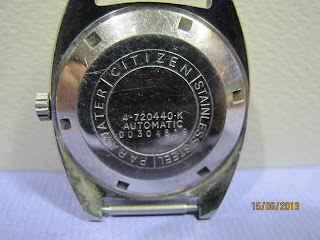